Alright, a quick recap! August 20th, we buy our new RV. August 22 and 23rd, we are already moving stuff to get ready for the purge of the century and now August 27th is quickly gaining on us and we are approaching the finish line for ridding ourselves of this huge storage unit. GO! We really are working fast here!...

Alright, a quick recap! August 20th, we buy our new RV. August 22 and 23rd, we are already moving stuff to get ready for the purge of the century and now August 27th is quickly gaining on us and we are approaching the finish line for ridding ourselves of this huge storage unit. GO!

We really are working fast here! We started moving everything from my storage unit into the house so we could get rid of everything we don’t need, in preparation of moving into our new RV and starting this epic new journey of ours! We were already planning our  Maiden Voyage for the end of October to North Carolina, so we needed to get crackin! The moving part was successful thus far and we were at the home stretch, but had to save the rest for the weekend because we both had a lot of work to do. Not only did I have work to do, I had some major purging to do. I had to go through every single box and bin I had and decide what I couldn’t possibly live without and what I needed to break away from and say goodbye to forever. It wasn’t exactly the easiest thing for me, especially in the beginning… more on that later – maybe. haha 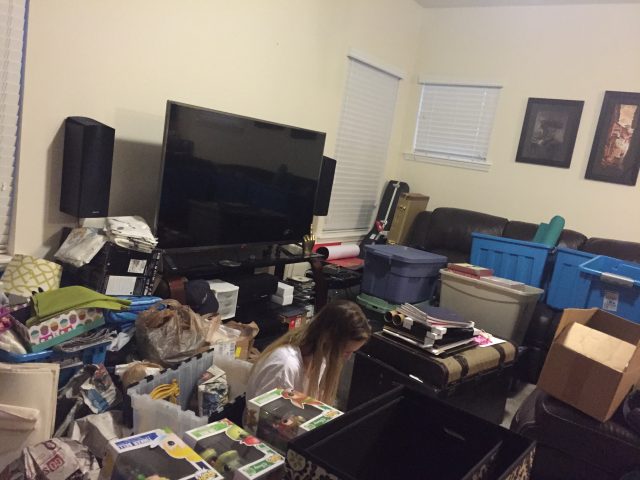 Sneaky James taking a photo of me going through just a small portion of my stuff. I can’t even believe I had so much now! Everything had a place in my old house before, now it all must go. 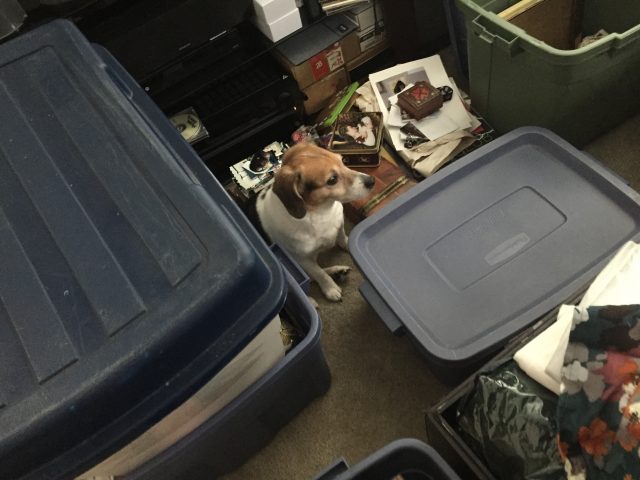 Chloe got herself stuck among the boxes and sorted piles.

I know, this looks crazy – and we agree that it certainly was, but it’s hilarious for us to look back on now, to see and remember this process. Those bins and boxes were literally EVERYWHERE. We could barely maneuver into the kitchen because of the bins… and a bicycle, let alone the entire place. The only safe haven was our bed, which was now incredibly tall because we stacked a couple mattresses on our existing one. I mean, it was comical – yet it was pure chaos that we brought on ourselves within a few days of hard work. Now came an even harder part. Thank goodness we work so well together!

Okay, Saturday the 27th rolls around and we have to finish this goal of getting rid of the storage unit. We dominated it, like we do with most things and it was a great, productive and successful day… until we returned to the house with MORE STUFF. Where the hell are we going to put it all?! I don’t know how we managed, but we did. Thanks again, Tetris! We miraculously fit it all in there. Just picture the foyer packed with boxes of new flooring and five dressers stacked together, among countless other items – we were going up the walls at this point… and then we attempted to mentally prepared ourselves for the next part – selling it ALL. 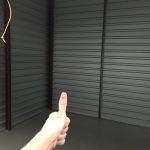 We did it!!! I’m also double jointed. 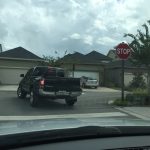 Bringing the last loads back to the house to purge and sell!